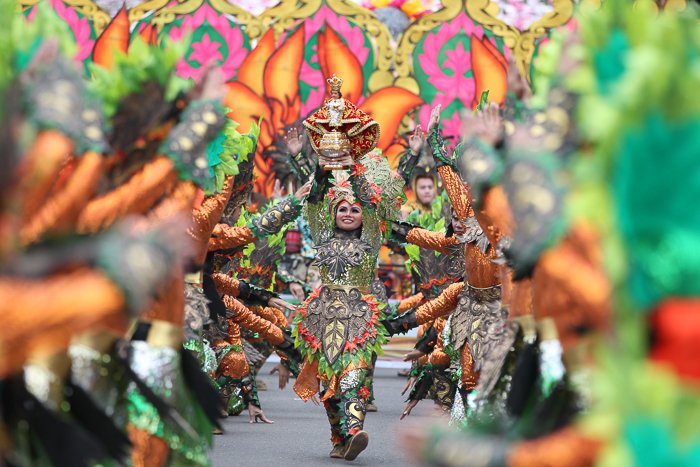 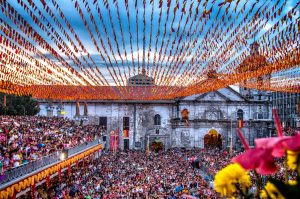 In Cebu, the holiday season doesn’t end with celebrating the beginning of a new year. It stretches throughout the whole month of January for the annual Sinulog Festival, a celebration in honor of Cebu’s patron saint, Señor Santo Niño. It’s known for the colorfully-themed dancing and street parade, and is something that’s inherently Cebuano. But, did you know that in other parts of the Visayas, Sinulog is also widely celebrated?

Aside from Cebu, there are two places that celebrate Sinulog with their own touch of culture. These festivals are Aklan’s Ati-atihan Festival and Ilo-ilo City’s Dinagyang Festival. Let’s take a look at how these two celebrate the Sinulog in their own ways. 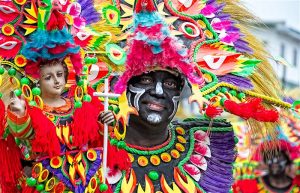 Although Cebu is widely known for its grander take of Sinulog, Kalibo-Aklan’s Ati-atihan Festival is said to be have inspired the Sinulog, and is dubbed as the “Mother of All Philippine Festivities”.

A version of its legend tells the story of an unnamed fisherman of Barangay Naile in the western part of the province who went to fish at the river, but he caught a piece of wood instead of fish. He tried to throw the piece of wood away, but it returned repeatedly to his net. He decided to bring the wood and used it as fuel to cook his meals. As the fisherman and his wife slept, they heard a beating sound nearby. When they looked where the sound came from, they found the wood with a carving of a child.

Seeing this, the fishermen decided to put it at their altar. The family received blessings from there, including bountiful catches. A few weeks went by and the fisherman decided to ask a priest for advice, and the priest told him to place the wood at the Ibajay Parish. Several days later, the residents wondered why the piece of wood always disappear and repeatedly found on top of the fisherman’s house. The residents of Ibajay interpreted this incident as a call for them to seek forgiveness of their sins, and part of their penance is to blacken their faces and body with coal and to dress in rags. After doing this, the wood no longer left the parish. 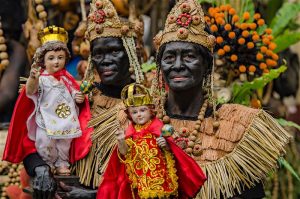 In June 11, 1871, a Kalibo priest signed a testament with businessmen in town to institutionalize the holding of the annual Kalibo Santo Nino Ati-atihan Festival. During those times, the tradition of its revelry was held every noon as a sign of penance while dancing in the streets. The National Commission of Culture and the Arts (NCCA) named the Kalibo Santo Niño Ati-atihan Festival as “The Mother of Philippine Festivals.”

Now, the phrase “Hala Bira! Pwera Pasma!” is associated with the Sto. Nino Ati-Atihan Festival as the revelers and devotees of some painted in coal, dancing to the beat of the drums while carrying their variations of baby Jesus statues. Festivities happen all over the town from morning to the wee hours of the next morning, rain or shine. 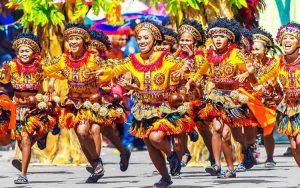 The word “dinagyang” was coined by Ilonggo writer and broadcaster Pacifico Sudario in 1977, and means “merry making”. It’s Ilo-ilo’s version of the Ati-atihan Festival. Started in 1968, a replica of the original image of the Santo Nino from Cebu was brought to Ilo-ilo by Fr. Sulpicio Enderez of Cebu as a gift to the Parish of San Jose, accompanied with several Cebuano devotees and received by the Ilonggos at the Mandurriao Airport. 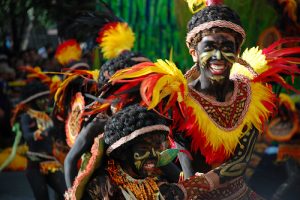 The festival had 4 participating tribes then, but as the celebrations improved through the years, the number of groups and tribes participating increased as well. Like the Aklan celebration, the audience are encouraged to dance with the parade and join the participants, giving them room to forget their frustrations and bind faith with the Santo Nino.

It was also in 1977 where the government ordered the various regions of the Philippines to come up with festivals that could boost the tourism and development. Ilo-ilo CIty readily adapted Ati-atihan as its project as its festival reflects the Illonggo’s artistry, craftsmanship and creativity through their dances and costumes.

Since the 16th century, the great devotion to the Santo Niño in the Philippines had spread through the Visayas. Many people make their yearly journey to churches to join the procession and festivals, and this signifies the rejection of former animist beliefs. It transcends generation and it has improved the socio-cultural aspect of the region. There’s no topping the grandest festival called Sinulog.

New Places We’re Looking Forward to Checking Out this 2019