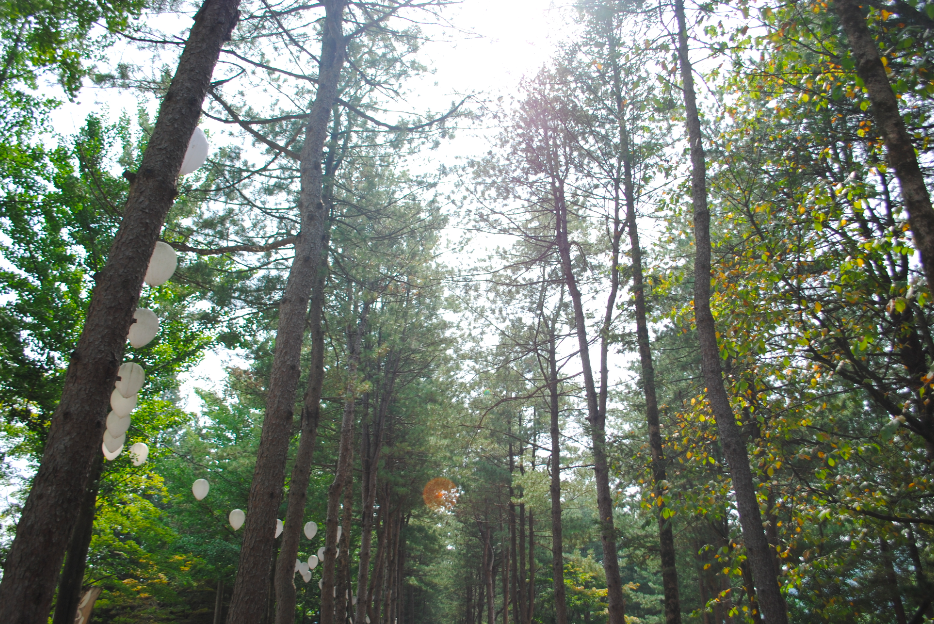 It was Chuseok when I stepped foot on Korean soil again. A major harvest festival and a three-day holiday, it’s a celebration that begins on the 15th day of the 8th month of the lunar calendar on the full moon. Chuseok, like many other harvest festivals around the world, is held around the autumn equinox. This time of thanksgiving for good harvest is observed through Koreans visiting their ancestral hometowns, paying their respect to their parents and eating traditional Korean feasts.

Once I arrived, the first destination straight from Incheon airport was Namiseom Island (popularly known as Nami Island), a tiny half-moon shaped island located in Chuncheon, a place that I couldn’t go to on my last visit because it was far from Seoul.

The nearly-five-hour trip from dawn in Cebu to mid-morning in Incheon clearly wore out most of my companions since they fell asleep as soon as we got on the bus. Not one for falling asleep even during long trips, I watched as the scene outside my window changed from the tall urban skyline to the laidback rural residential areas and stretches of plantations.

Two and a half hours later—the traffic jams we encountered along the way added to our estimated travel time (however, I was unfazed, being a resident of Cebu)—we had arrived, but not quite yet. We were in Chuncheon, the city where the island was located, but we had to take a five-minute ferry ride to cross the river between the port and Nami Island.

Upon embarking the ferry, I was already admiring the trees that stretched as far as my eyes could see. The sunlight that streamed past the canopy of leaves overhead as I walked was a muted gold, almost silver in colour as it illuminated the path. The breeze was slightly chilly, even more so because of the many trees that lined up the path and were scattered around the island.

Nami Island is beautiful when visited in autumn (early autumn, in my case), so the volume of visitors arriving and admiring the surroundings was not a surprise. Though tiny, it was filled with sights and sounds. Couples took photos every chance they got, with their clothes color-coordinated and their smiles nearly identical in happiness. Kids ran around with their parents chasing after them to make sure they didn’t fall. Tourists huddled together as their tour guide explained the place’s history.

Those familiar with Nami Island will associate it with the K-drama titled “Winter Sonata”. A statue of the main characters had been erected in the middle of the island, named the “First Kiss Statue” in which the two lovers are locked in an embrace and staring into each other’s eyes.

On Nami Island, the animals are able to roam freely. Squirrels, rabbits, deer, peacocks, ostriches, geese, and many other critters greet you as you go around.

The trees of Metasequoia Road, Gingko Tree Lane and Central Korean Pine Tree Lane are the most popular photo spots, where their heights make it seem like they’re holding up the heavens. In early autumn, the foliage is still verdant and deep while it turns into a mixture of reds, oranges and yellow later in the season. It’s possible to just stand in between the rows of trees and simply lose yourself in the scenery.

Of course, you can’t forget to get a taste of the food. Try the Hotteok at one of the many food stalls available on the island. Best described as pancake with a crisp outer layer and a gooey red bean filling, it’s a popular Korean street food that goes for just KRW1,000. It’s delicious when you take a stroll on the wooden walks around the lake’s edge as you take in the stunning view of the lake and surrounding mountains.

Though the island is small, it does take some time to get around between places. It’s possible to rent a bike or take an electronic car if walking isn’t something you’d like to do, or if you would just like to enjoy the scenery while on a bike.

It’s a wonder how a tiny crescent island could hold so much beauty. The moment I walked off the island and onto the ferry to the city, I knew I would come back for more.