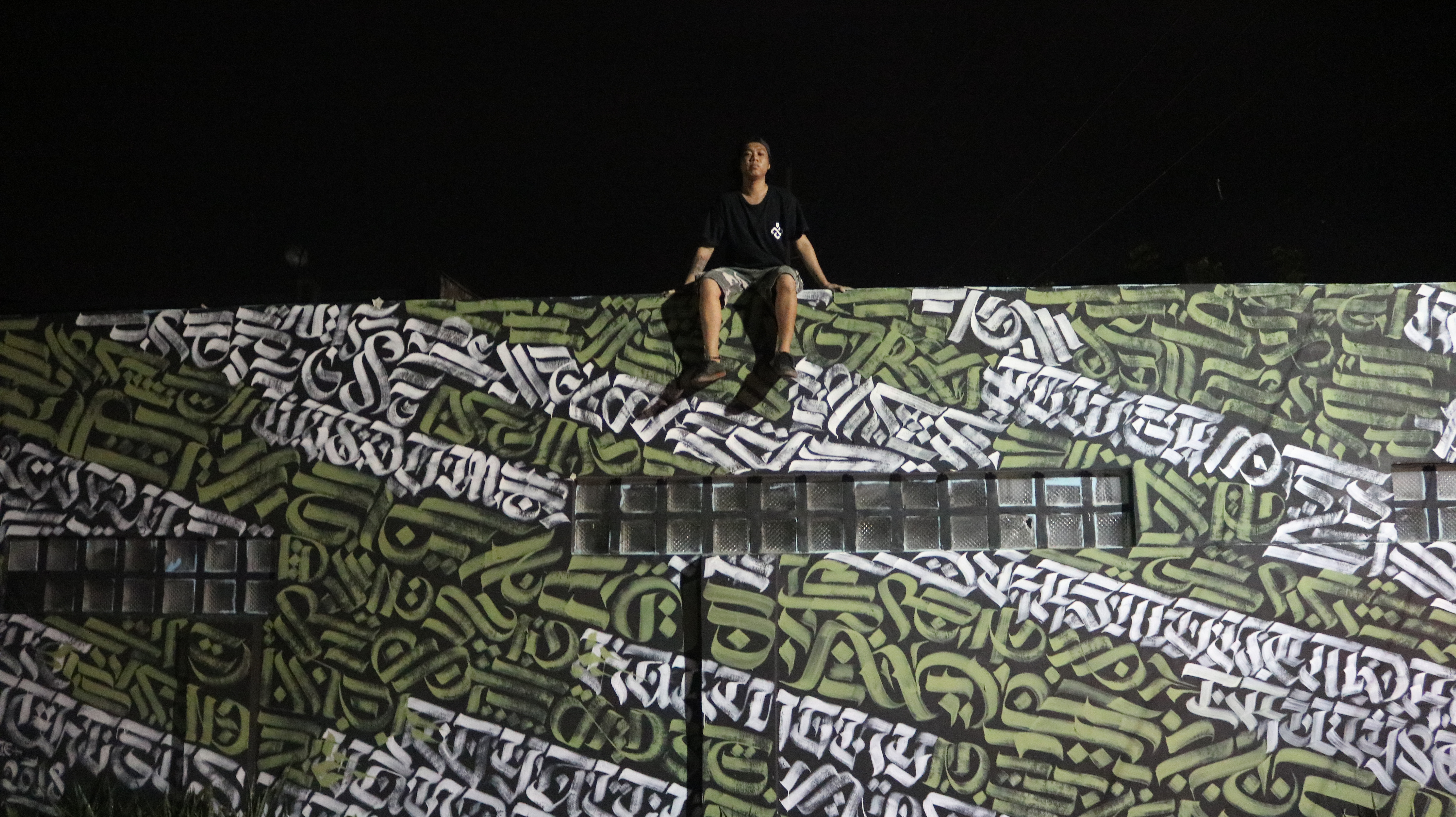 Historically, calligraphy has been defined as an art form that practices creative expression and skillful writing. Using the tip of the brush in writing, this art form still gains respect in the modern art scene.

The fusion of the writing form that means beautiful writing, calligraphy is brought to the newest medium. Calligraphy has been used in wedding invitations and certificates. But this typography has gained attention on the streets.

Local street art in Cebu varies in types and areas. Unlike many cities in the country, Cebu City has been a home for different kinds of street expressions. Graffiti continues to gain infamy in Cebu City. From stereotyping to hatred, street artists and graffiti artists are viewed to be doing illegal movements in expressing their forms of art in the streets of Cebu City.

Today, local artists now explore the combination of graffiti and calligraphy. This experiment was bravely done by Kent Anthony Sanchez.

During his high school years, Kent or commonly known as Krem, has always been interested in typography. From drawing posters and joining contests, his hobby in writing grew rapidly.

“Before, I never had the chance to buy my own materials. I used regular pencils and ball pens. Calligraphy pens are not that cheap so I saved money and used that to buy my first ever parallel pen,” he shares.

Kent Sanchez has developed his own style in calligraphy. Not satisfied with papers, he brought his techniques to the wall.

After graduating high school, he met STROKE, a team known for calligraffiti. “I was very interested in combining my interest in typography and street installations so I started researching,” Kent says. “I posted some of my wall installations online and because of this, I received positive feedbacks and these motivated me to paint more walls with calligraphy.”

“I am very happy and proud of the wall we created. The techniques, of course, are first, to inspect the wall if it’s fit if it’s accessible and easy to see,” he says. “Be friendly with the brush, it was really a challenge at first especially controlling your hand because the wall is really huge,” he continues.

The biggest calligraffiti wall in the country can be viewed and passed by in Banawa, Cebu City (before arriving at CCSNHS).

Kent is also a part-time tattoo artist and as a local artist that explores different ways of artistic art expression, his visions include creating a spot painted that people will never forget. But this biggest calligraphy wall will surely be never forgotten.

“I do my art on the streets for free and I consider this form of art revolutionary because this is abstract and done freestyle,” Kent shares.

Just like any form of street art, it is normal for local artists to receive negative feedback and infamy.

Kent proudly said that this production has made him realized how powerful streets can be in elevating calligraphy as a typography.

“People say my art doesn’t contribute to anything at all but I let it go because I know I am happy with what I am doing,” Kent says.

Next to his biggest wall, he hopes to bring his art in different countries. “Maybe the uniqueness of my style will inspire other artists to explore it as well and I am very willing to help,” he assures.

Local artists experience challenges beyond their control but just like Kent who believed in his capability and talent, the biggest calligraphy wall in the country just proved how skills partnered with dreams and hard work can never go wrong.

Related Topics:CalligraffitiKent Sanchez
Up Next

You Need To Grab These Local Artists’ Zines Now