The on going La Biennale di Venezia 55th International Art Exhibition which is open to the public until November this year has inspired artists from all over the world including our photographer Olivier Yoan who shot the Spring/Summer 2014 collection of DEADMEAT, an Italian brand that is centered on underground art scene and the advancement of digital printing.

“Dead Meat Spring Summer 2014 collection is about the long thin line that link the blues, the blue devils sang by John Lee Hooker, the prodigal son of a generation, wrenched from its soil to be sold and enslaved far away home, and his grand nephews: Pharrel Williams and Flying Lotus, a new generation of black people grown up in new social and cultural context placed between the reality of a mediatic kingdom and the virtual fields of Sylicon Valley, a Playstation joypad in his hand, Terminator and some Jean Claude Van Damme movie, any sort of pod on the desk and a 8 bit soundtrack mashed up with some funky grooves. “

In Art as in Love 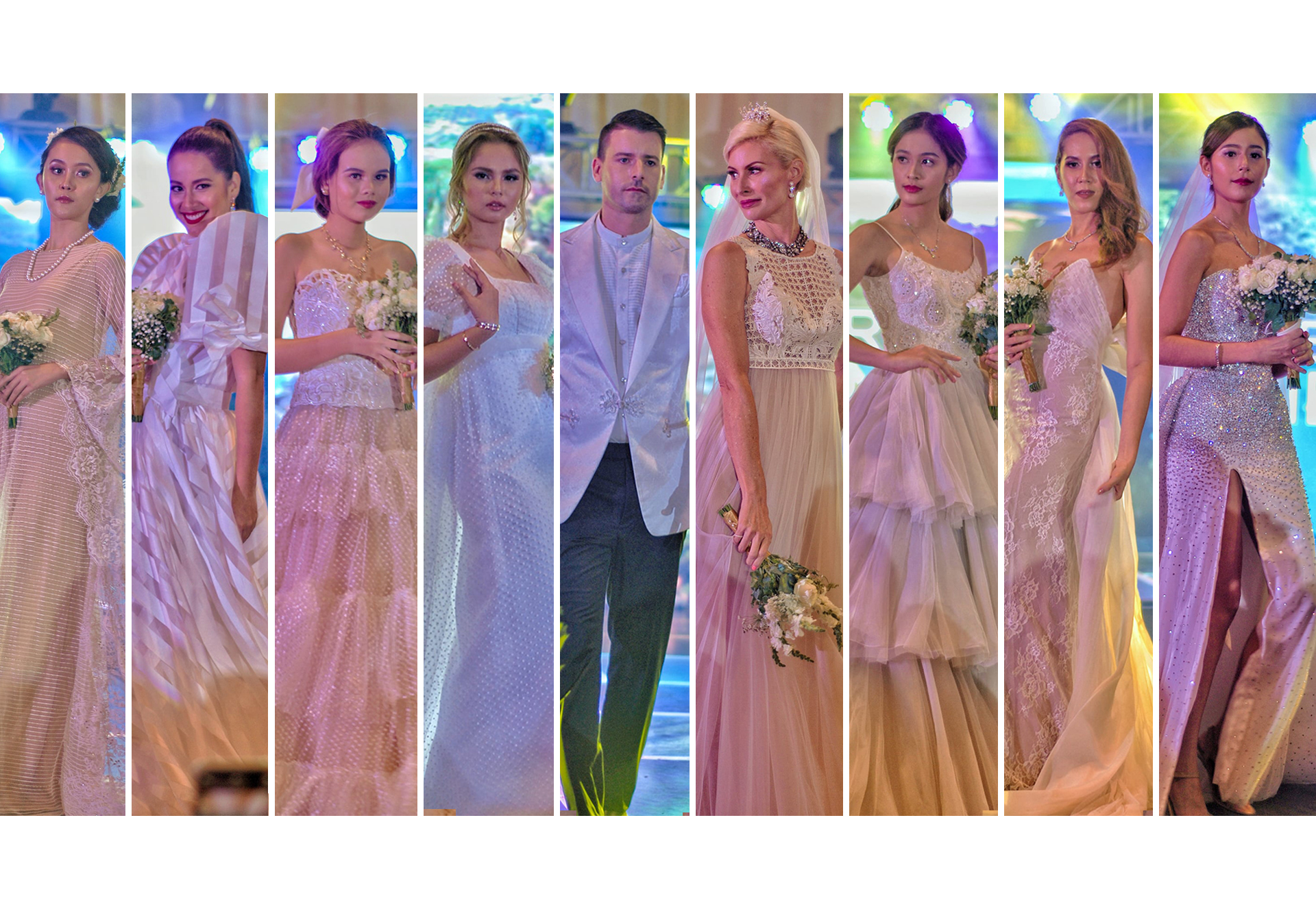 To set the event’s mood, AD models Kevin Lahousse and Gingie Alducente acted as newlyweds joining the expo and leading the guests to the exhibitors’ booths.  Yet, the highlight of the event was the glamorous fashion show set in the world’s most visited wedding destinations, as the mannequins of AD models paraded the haute couture creations of Cebu’s A-list fashion designers. The show was opened by Miss Earth 2008, Karla Henry-Amman, wearing a bridal gown designed by Hanz Coquilla.  Her wedding mood was the historic streets and sceneries of Vigan, Philippines.  Coquilla created a Filipiniana-inspired bridal dress with perfectly constructed butterfly sleeves, exquisitely clean lines, and masterfully crafted bias skirt of balanced cones and flows.  Valerie Alvez showcased a bridal dress made of vintage Chantilly lace.  Alvez proved her skills in manipulating laces to be impeccable; the bow detail at the back added glamour to the dress, exuding luxury to the bride wearing Alvez’s masterpiece.  Wendell Quisido set her wedding theme to the dreamy beaches of Ipanema; and as her model glided on the runway, everyone in the audience dropped their jaws to the intricately detailed bridal dress that Quisido made. Quisido designed a bustier dress with well-balanced panels that wonderfully fitted the model’s figure; but what made Quisido’s dress jaw-dropping are the countless Swarovski crystals that covered the dress.  Dexter Alazas joined the fashion show with a 1920’s inspired wedding dress of vintage tulle and embroidered in the decade’s popular baroque patterns.  Alazas has shown the wonders of working with delicate fabrics and the opulence of vintage embroidery patterns. The fashions show also brought us to the rich sceneries of Mallorca, Spain with Ren Manabat’s three-tiered wedding dress.  The labor-intensive layers upon layers of soft English tulle made Manabat’s artwork stand out, among others.  Another head turner is a dress that was carefully planned and architecturally constructed, the bridal gown designed by Protacio.  Protacio has obviously studied well which fabrics to use and how each fabric is sewn to the other to create an illusion of nudeness under layers of vintage Italian mesh. The dress was architecturally constructed like the Burj Khalifa where every piece sits perfectly with each other in harmony and balance.  Fashion connoisseur Marichu Tan-Geson created an extremely detailed bodice lined with Swarovski crystals, and a skirt made from layers of dotted soft English tulle.  Tan-Geson’s manipulation techniques on the soft tulle and how she delicately draped every layer of the tulle upon the other is interesting and intriguing.  With a work of art as beautiful as that, I could say that Tan-Geson is the Madame Gres of Cebu fashion.  The show ended with a groom and a bride wearing a 19th century English-inspired wedding ensemble by master couturier, Philip Rodriguez.  Rodriguez has proven once again his artistry and expertise in fashion by creating an empire-waist gown with ruffled sleeves made from dotted Italian mesh of 100% silk and vintage silk taffeta.  Rodriguez presented a truly elegant wedding dress; lesser on the intricacy but more on the richness of the materials being used.  The rarity of Rodriguez’s fabrics already makes his dress worthy to a MET gala exhibition. The models wore the timeless and recherche jewelry collections from Royal Gem to match the bridal dresses of the featured designers.  Every jewelry piece is made to complement a woman who loves fashion and whose self-awareness dictates her own style.  From green sapphires to yellow diamonds, every jewelry piece is stunning.  No wonder why socialite and fashion icon, Heart Evangelista, loves and promotes Royal Gem. All models are wearing Shandar bridal footwear. The Grand Wedding Destination Expo at the Events at Soltana will run until the 24th of May 2021 with exciting activities:  a maquillage session with Jessie Glova, a bridal make-up competition and show, a financial literacy session for new couples, a talk on real estate investments, a session  with Rod Bautista and Eddie Jamin from the Centerpiece Weddings and Events about wedding destinations in Cebu and the new norms in wedding celebrations, and a whole lot more of raffle prizes from Plantation Bar Resort and Spa, Solea Mactan Resort, Savoy Hotel Mactan, and others. 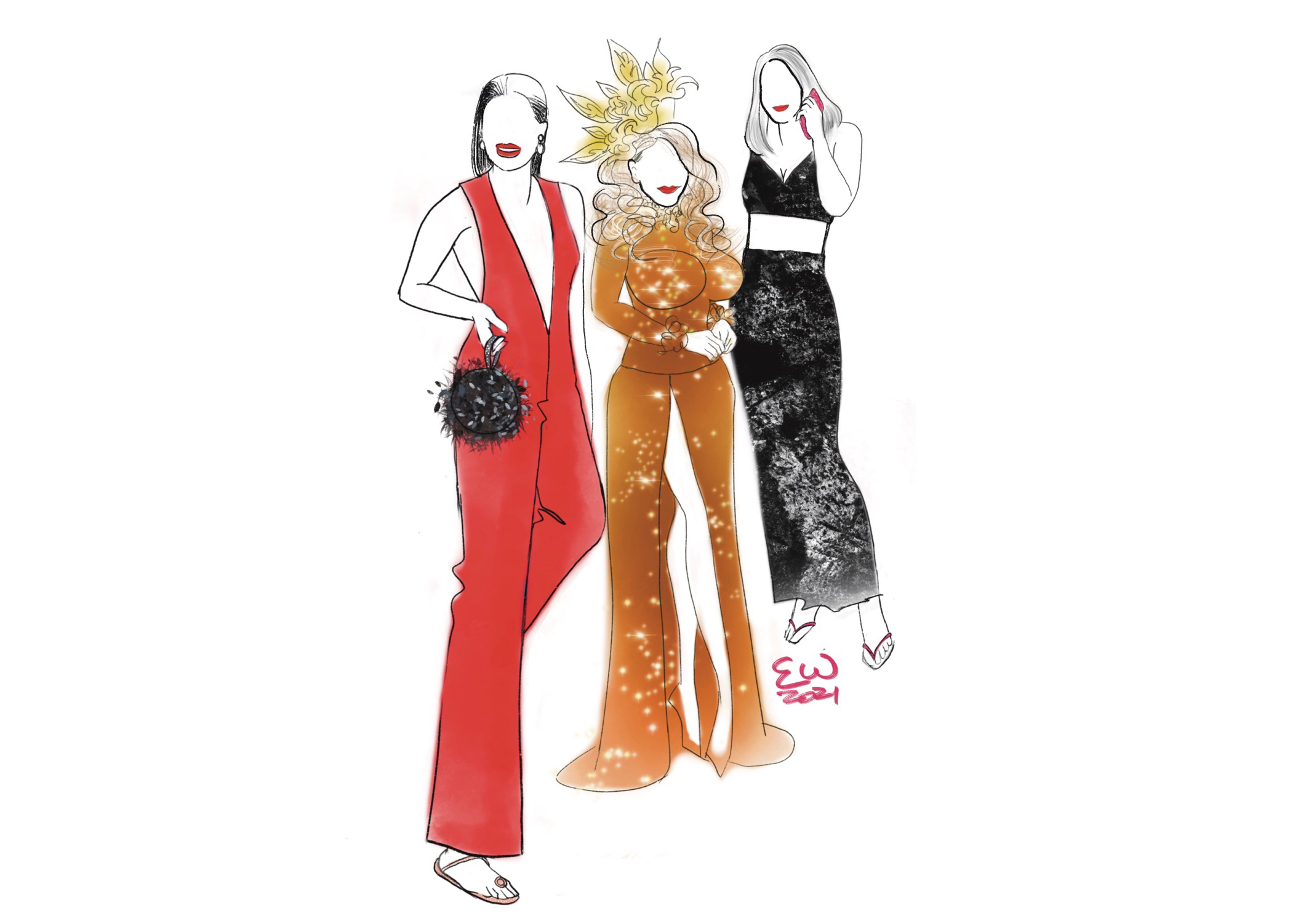 Cebu’s own Lady Whistledown is back after a long hiatus and talks about the naughty ones who comprise the initial #TroubleTrifecta, three ladies who you may or may not know…

It’s been eight years since someone’s picked up this particular (jewel-encrusted) quill so thought it rather apropos to begin sharpening those French-manicured talons and polishing our sardonic wits once again. After all — dear amigas — there is only so much Netflix one can watch, or peloton one can engage in, or caviar-topped foie to prepare, while we’ve all been locked down in our kubôs for well over a year!

To be sure the last twelve months have been a rollercoaster of emotions, a carousel of follies and a series of blunders that have reversed decades of growth resulting in historical levels of unemployment while a very few have been channeling  Winston Churchill’s adage of “never waste a good crisis” a bit too much. While we can go on and on about the bungled and disastrous government response, we will limit our political commentaries here as we have no interest – nor inclination — to open that rather voluminous Pandora’s box.

The armoires that we will explore will belong to three types of our island’s “alta” sociedad who – in this last revolution around the sun – made us cringe and bust out many tubs of popcorn through their sheer audacity, lack of sensitivity, and overall dopiness.  This –  ladies (and lady wannabes) – is therefore the debut edition of the  #TroubleTrifecta.

The first is that amiga who, by choice or plain predilection, just cannot keep her facts straight.  Let’s call her Mistress of Disinfo coz one simply cannot trust what comes out of her well-lined lips or read from her often convoluted (and run-on) status updates. In this age of ubiquitous and nearly instantaneous information and the proliferation of fake news, the least one can do is check the veracity of what one puts out in the social media realm.  As with anything else, quality is key!

The next Vixen of Vexation is that overbearing arriviste who is desperate to bowdlerize her courtesanal past by plastering her obviously enhanced and Gluta-enabled mug on every surface (and platform) known to modern man.  This self-proclaimed Madame Multiverse is quick to brandish her (dubious) accomplishments, has an affinity for B (or C?) rated actors and milks her closeness to certain members of the Old Guard.   In her perpetual quest for legitimacy and acceptance by the upper echelons, perhaps this Señorita aspirant should heed the advice of  Malcolm Forbes when he declared: “How to Succeed: Try Hard Enough; How to Fail: Try Too Hard.”

Our last Duchess of Disorder is definitely NOT the least in this Gallery of Rouge and has actually been the source of not just consternation but of many a disruption – and not in a good way.  This Soaper Woman is so-called due to her propensity to air out all her filthy lavada to anyone who will listen or bother to read her IG stories. Besides giving any Grammar Nazi a massive coronary, this Fräulein of Fracas has been known to commit acts of arson, has no qualms of engaging in online character assassinations AND seems to have a never-ending bevy of skeletons that are constantly feasting in her many closets.

Ladies, please!  While we have to admit that we derive a certain guilty pleasure from your virtual explosions and implosions, they do get very prosaic – very quickly.  Discretion, like intelligence and proper manners, truly never goes out of style.

So there you have it folks. These tumultuous times we live in certainly do not need any more brouhaha so  please remember to be precise, don’t try too hard and always maintain a  certain sense of delicadeza. Not only will your lives be simpler and more pleasurable but maybe, just maybe, you may finally crack that clique that you’ve been clawing your way to be a part of. 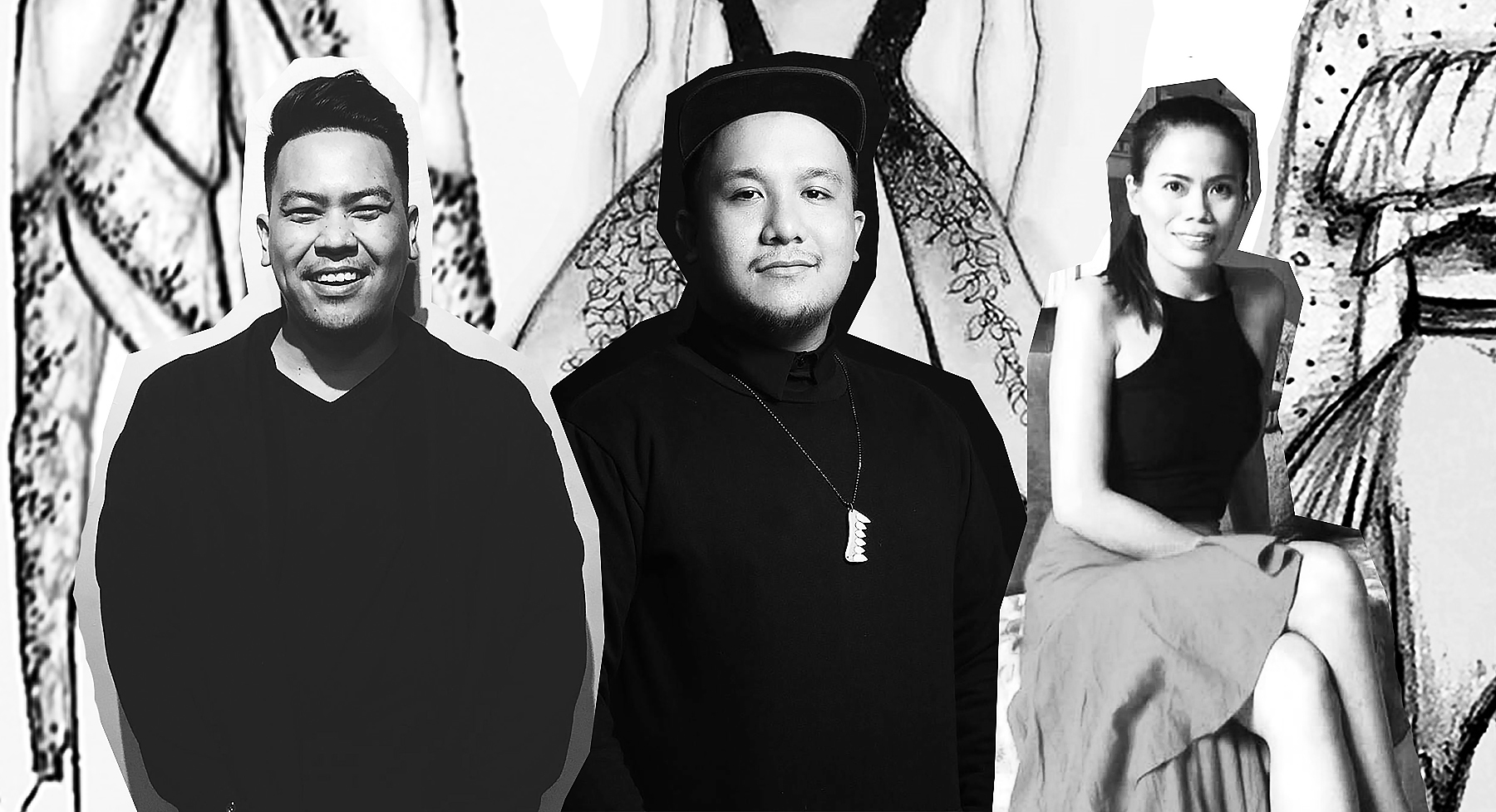 What’s an ideal New Year’s Eve soirée outfit? Three of Cebu’s young fashion designers share their suggestions for the ladies on how to ring in the year 2020 in style… “Holiday dressing is all about sheer skin and comfort. A silver gray palazzo jumpsuit with sheer lace cut-outs is in order.” -Mikhail Achas, Fashion Designer “Holiday dressing is all about clean lines and sophistication. A tailored blacked tea dress with godet insertions will totally give out a modern vibe with a toast to the 50s.” -Bree Esplanada, Fashion Designer “I chose this design because it is so comfy and light. The raffles make it look elegant and versatile for different events, like awarding ceremonies or a New Year’s Eve party.” -Eve Navales, Fashion Designer

Something to watch out for this year from these young designers will be their collection exclusively designed for the cast of Eve Ensler’s The Vagina Monologues for V-Day Cebu 2020, which will be staged in March. For more information, visit the Facebook page V-Day Cebu.