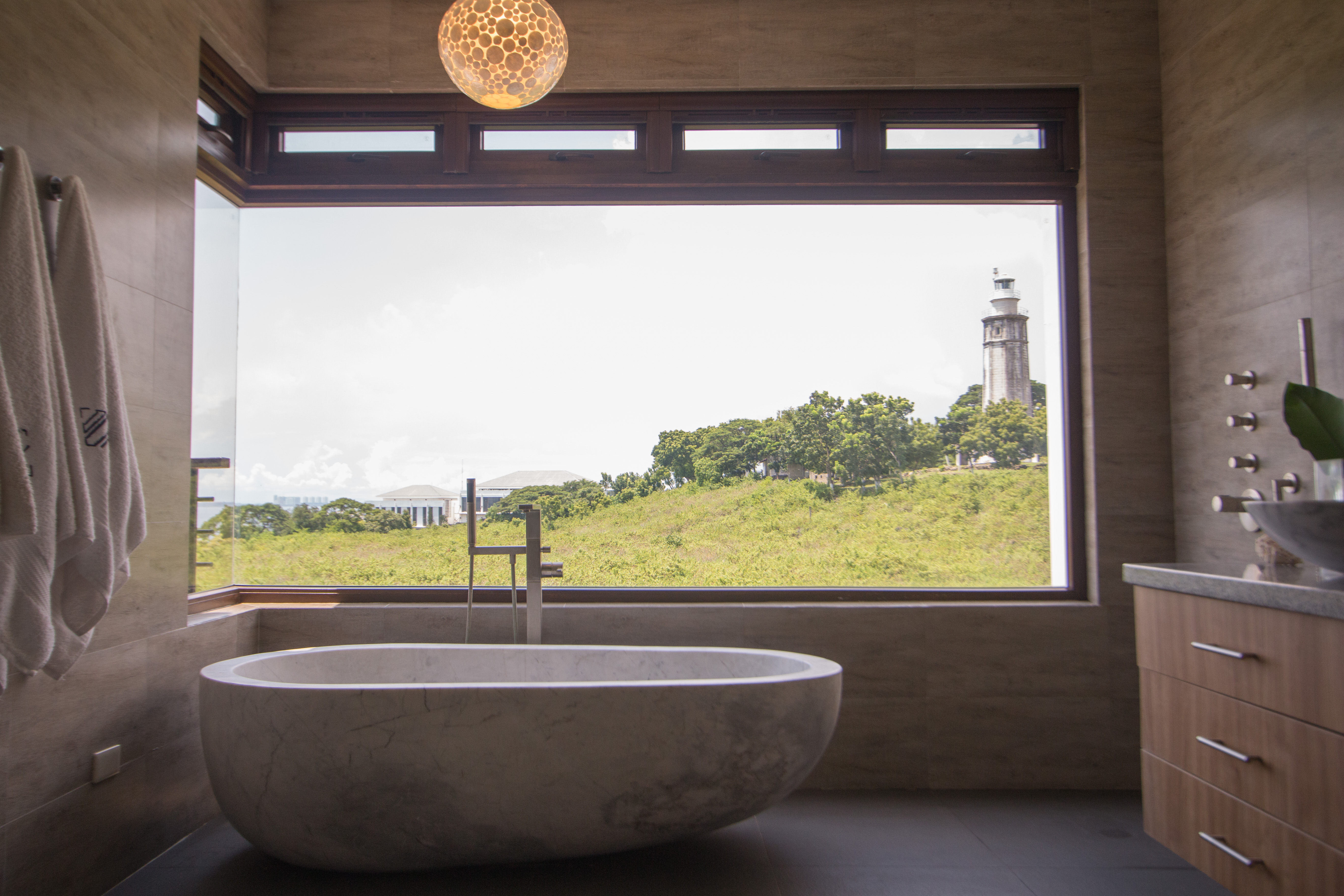 Once James Linsey opened the oversized wooden double doors that led into his house, it was clear that the star of the morning would actually be the playful doberman that approached us curiously as we walked into the foyer. “I don’t really own this house. It’s actually Atlas’,” James jokes, referring to the dog who was then settling on the living room sofa.

James has had Atlas for almost as long as he’s had the house, which finished construction about three years ago. A retired lawyer from New York City, James decided to settle in the Philippines, where his husband Don Servillas is from. He especially fell in love with this particular piece of land—situated on a slight hill in Lilo-an’s Amara, which looks out to the municipality’s historic lighthouse.

“We call it the Parola House because almost every room has a view of the parola,” James shares, using the local term for lighthouse. The architecture of the house definitely takes advantage of the vista—the main living rooms are positioned towards the lighthouse, with large picture windows that frame the structure as a sort of living art piece.

The couple had worked with architect Jun Ruaya, although James had specifically wanted to take inspiration from Horace Gifford’s work on Fire Island, a small stretch of land off the coast of Long Island that had garnered popularity as a gay vacation destination in past decades. “The Architecture of Seduction,” James says, reading the title of the coffee table book which served as the moodboard for the house’s design. Wooden elements, textured details and streamlined shapes cover the inside pages of the book.

These features found their way into the Parola House in the square spaces of the layout, the high ceilings, linear details and the aforementioned scenic windows. “We really wanted a more American and modern style when it came to the architecture,” James explains. He adds that the high ceilings were particularly important to allow better ventilation and take advantage of the cool ocean breeze. “Most days, I don’t even have to turn the air conditioning on,” he says.

A feeling of spaciousness is certainly felt upon entering the house—the two-storey foyer feels even larger with sparse furnishings, a large staircase, vertical window detailing, and drop pendant chandeliers hanging from the ceiling. A small indoor garden is tucked beneath the stairs, while across it a wide white wall is punctuated with a large Sio Montera painting and a Barcelona chair sitting beneath it.

Sliding glass doors lead to the den which holds a sitting area and entertainment center, and offers a view of Amara’s sprawling grounds and the sea beyond. Further into the house is the open floorplan of the living, dining and kitchen areas, each tucked into their own nooks.

With its sleek gray counters and modern appliances (“I know—so American!” James laughs when I point to the dishwasher), the kitchen gets a visual boost with the patterned backsplash. “Those tiles were made for us in Morocco, and had to be shipped to New York and then shipped here in balikbayan boxes,” James relates with a laugh.

A similar challenge came when they had the Mies van der Rohe daybed shipped from Hong Kong, along with the Barcelona chair. “There was some delay in customs,” James shrugs. The rest of the furnishings were locally sourced, with James and Don working closely with Murillo for many of the pieces. “Their pieces are so good.”

Finding that balance of modern design and traditional Filipino elements was important to the couple in conceptualizing their home’s interiors, which James and Don had put together themselves.

The dining table, for example, is made from one piece of Ironwood, shipped all the way from Surigao. “It’s Don’s hometown,” he adds.

The traditional design technique continues at the roof deck, whose walls are lined with woven panels. “These guys came in with all the materials, and they just wove it right here on the spot,” he relates. “I really liked the pattern, I felt it was very native.”

The roof deck is one of James’ favorite areas of the house. The third floor sanctuary that looks out to the lighthouse and its grounds features vertical gardens, and has a bar and dining area. I tell him it’s all very New York, and he laughs. “It’s so rare for people to have roof decks here,” James states. With a view like this, it seems all too appropriate.

In my opinion, though, the best room to admire the view is the master suite. Occupying the southeast corner of the house, the bedroom offers 180-degree views of the Mactan Channel and the lighthouse. The bed faces east, allowing its occupants to enjoy the early morning sun. “At around 5 or 6 in the morning, the view from here is just beautiful,” James shares.

Through a walk-in closet is the master bathroom, which certainly feels like the best corner to relax in. A window runs along the length of an entire wall, while sitting next to it is a marble bathtub. “It’s from China, and it’s carved from a single block of Carrara marble,” James shares. The slate gray walls are decorated with capiz-framed mirrors and a ceiling lamp from Murillo.

James’ enthusiasm as he shows us around the house is palpable, and who could blame him? The home that he and Don have built for themselves is chic and comfortable, bringing together remarkable design elements while maximizing some of the best views in the area. “I hardly go into the city,” James admits, adding that he flies back and forth between New York City and Cebu. “I fly there usually about twice a year, maybe in the summer, but probably eight months of the year, I’ll be here.”

“It’s all very functional,” James continues to describe the house. “We wanted rooms that we would really use.” Perhaps that’s really what gives this house its appeal—although the details and fixings are thoughtful and luxurious, it still feels lived in and relaxed. Nothing in the space is there simply for show, and its habitability is something that will continue to draw guests and its residents—Atlas included—in.

Here’s a Turkey Recipe That’s Great For the Holidays